Well, yes, I've been a blogging slacker this month. I have a few written posts started, and a few more in my head. I realized today that none of those are going to get finished. So I'll just write a little summary of my month, hopefully keeping each little adventure down to a paragraph. 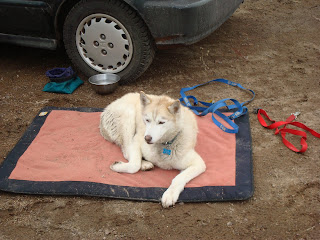 Sascha was content to hang out at the car during the BadAss.

For the fourth year in a row, the new year started off with the BadAss near the Badlands Rec. Area east of Bend. Overall participation was down a bit this year with about 60 total, but with 14 finishers, the 50k had its most ever finishers. Thanks so much to everyone who came out and played in the desert with Bronco and me, and congratulations to Ashley and Max for setting new course records. 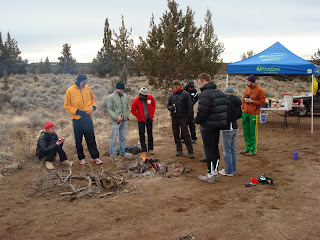 Chillin' out in the Badlands post-run, BadAss style!
The secon 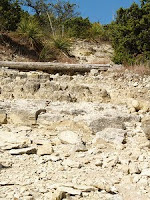 d weekend took me to Bandera, TX, for the Bandera 100k/50k, as the Montrail respresentative. I had such a blast meeting a whole bunch of new people and answering lots of questions about Montrail, Mountain Hardwear, and just running in general. (I gotta get myself a job where that is part of the routine!) The race was cold (10 degrees at the start), but sunny most of the day. Although my 50k wasn't quite the race I hoped for (4:42, hoping for 4:15-4:20), I truly enjoyed the rockiness and ruggedness of the course. I got to help crew quite a few 100 k'ers once I finished, and I even paced Pam Smith the last 6 miles of the 100 km. A very competitive race, the top-4 women 100 k'ers crushed the course record, as did the top-2 guys; plus the top 2 men and women each earned a spot in Western States this year through the Montrail Ultra Cup! The day ended with a fun group at a local eatery with good food, margs, and hours of story swapping that only trail runners can understand! Thanks to Joe for hosting a great event. 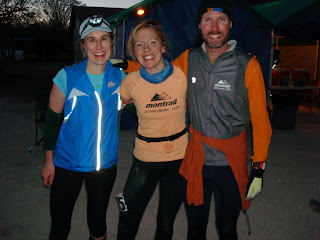 The Cascade 1/2 Marathon on Jan. 17 took me to Turner, OR, to try to lower my p.r. of 1:15:57, set at the same race unexpectedly last year. Although outfitted in my trusty Outlaws singlet, I absent-mindedly wore my blue shorts (blue=mellow=slow) as opposed to my red shorts (red=fast), and as a result, I didn't p.r. I was happy with my effort, though, on this blustery day, battling the elements solo for much of the race, finishing in 1:16:11. Next time, definitely red. After the 1/2, William was nice enough to take Sascha and me on a hike of the Shellburg Falls area, giving me a little lay-out of the land for the Santiam Canyon Scramble. It's a very cool area that I look forward to exploring more on my trips to the west side of the mountains. 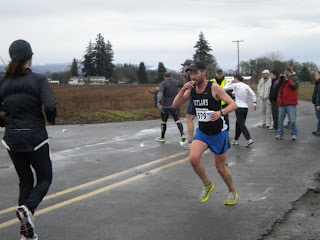 SOFA (Southern Oregon FatAss) was Jan. 24, and four of my main training buddies (Chris, Darla, Ashley, and Josh) were headed down to the Rogue to run that, while I decided to stay local and get in a solo hilly 20 at Smith in preparation for Orcas Island. Well, they couldn't bare the thought of leaving me, so they decided to join me at Smith, as well as Peter and Kami. We had a beautiful day running in a couple inches of fresh snow under sun and blue sky and views that extended to Mt. Adams in WA. I even got a little sunburned! The next day Sascha and I played in the snow for a nice 6 mile snowshoe at Three Creeks Snowpark. Although crummy weather, it's always so much fun for me to watch Sascha excel in her element! 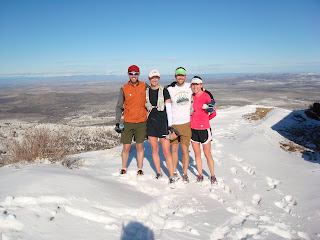 Five weekends this month means five mini-adventures. Thus, this weekend kicked off with the 5th annual MadAss in Madras, OR. The MUTs, Stan and Maura, really know how to host a kick-ass fatass! There were about 45 runners, 10 of which ran 50 k'ish, and the other 35 ran various shorter distances. I opted for the 16.5 mile option, through a beautiful canyon to Lake Simtustus. The post-run potluck was, as always, a scrumptious treat, complete with two kegs of Maura's homebrew, one of which was Chocolate-Coffee Stout - now that's some good drinking!

Today's beautifully sunny day started with a little run out to Josh and Ashley's super cool new house; I'm voting for them to keep the orange and yellow walls! Then it was time to hit the snowshoeing trails at Three Creek Snowpark again.! This week, Amy and Callie joined Sascha and me for the 6 mile loop. Great conversation, cool snow angels, and good workout on the trail, then quite possibly the best-ever pie awaited us at the car - raspberry rhubarb from Sisters Bakery. Supposedly it was for Callie's birthday, but really, I didn't need an excuse to devour a couple slices!
And thus, January came to a happy end...
Posted by saschasdad at 22:43

you run a lot.

thanks again for playing snowshoeing guide. and that pie was quite possibly the best i've ever had. i'm going to try to use my inside connection to get the recipe for that crust....

There is obviously a lot to know about this. I think you made some good points in Features also.