After running the Hagg Lake 50k for 6 out of the last 7 years and volunteering the 7th, I figured I pretty much have that 2-lap race down. Sure I still want to go back and run sub-4, but not yet. This year I decided to run the 25k, i.e., the j.v. race. Although I'm running fewer ultras this year, the 25k was a great way for me to still get my racing social-fix while seeing how fast I could run one lap around the lake.

I carpooled to Hagg with Bend fast-guys Andy Martin and fellow Montrailian Max King. Both very fast, competitive, and undefeated in the few ultras they've run, I was hoping they would beat each other up for the W. We stayed at the Grand Lodge in Forest Grove on Saturday night and enjoyed our beverages of choice (me - hard cider, Max - whiskey, Andy - water) while watching a women's curling match between Canada and some Denmark hotties. Wild night.

The next morning, as all the varsity runners took off at 8 for the 50k, I had fun cheering for many of my friends on their way back through the starting area after their 3 mile out and back. I also did a pretty good warm-up as I wanted to be prepared to go hard from the start. At 9, I joined 250 others on my first Hagg one-lapper. I was excited, and I was also slow. My warm-up was long, but not quick enough, and the lead group of 4 easily dropped me immediately. Dang! But I was happy to be sportin' my pink Orcas Island 50k vest for the out and back in support of 25k'er Mandy Giblin.

Once I got back down to lake level, I picked up my tempo with hopes of catching at least 2 of the 4 ahead of me. I like having someone behind me in faster races as it helps keep me honest with my pace, and Jeremy McWilliams provided that role for me until a bit past the first a.s. We hit a.s. 1 at 10k right about 42:00, a bit behind pace for my sub-1:45 goal. As the day was sunny but comfortably cool, I opted to run sans bottle and I loved it, but I did stop really quick to actually take a gel and drink a whole cup of water instead of just trying to run through and choke on a few drops. 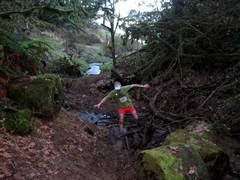 That's me navigating a creek crossing that eliminated a road section from previous years - a very cool improvement!

I felt good so decided to increase my effort, catching back up to, and then passing, Jeremy. Soon after I caught one of the 4 guys from the lead pack, Aaron Ladd. Upon seeing me, Aaron noticably picked up his pace, which was great as it gave me someone to run with again. A couple miles later, I decided to throw in a little surge and passed him. This section also started getting warmer and muddier. I was pushing hard and having a blast!

I hit a.s. 2, 11.2 miles, in 1:16. Again I quickly stopped to suck down a gel and drink 2 cups of nuun. Fellow Christmas Campers and all-around cool people Steve, Liz, and Kamm were working there and they got me in and out quick while hooting and hollering for me, and letting me know 3rd place Richard Bolt was almost 2 min. ahead. I know Richard is fast and so taking back 30 sec./mile for the last 4.3 miles was going to be tough, so what else could I do but just go for it!

I was cruising along pretty well, dodging past 50k'ers, speeding up on the fast sections, slowing down considerably on the goopy muddy sections, of which there were a lot in the last section, and really trying to open it up on the short paved stretches. With 2 miles to go I noticed I was quickly gaining on a red shirt, and convinced it was Richard, I pushed hard to catch him. Well, turns out a 50k'er was also wearing a red shirt and black shorts.

I passed the one mile to go sign in 1:38:54. Could I finish with a 6-flat to reach my sub-1:45 goal? I didn't think, I just ran hard...for a couple minutes until the best/worst sticky, goopy mud of the day became the trail for a 1/2 mile (Ness even lost a shoe in it and decided to finish sans shoes!). I knew I wasn't going to glide across this, so I slowed down, shortened my stride, and just got through it without pulling my groin or going down. I finished in 1:46:10 for 4th place. I was happy with my effort and time. As for my place, well, in 7 Haggs, I have now finished 4th four times; just call me Mr. One-Off-the-Podium. 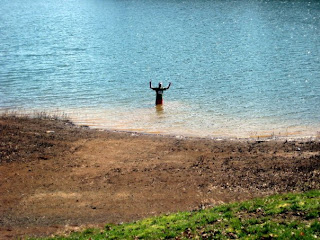 Soaking the legs and cleaning up. It sure doesn't look like February in western Oregon!

As for the 50k, Max crushed it in 3:26:54, breaking the course record by almost 17 minutes. (One of my goals for Hagg was to average the same pace as Max; I figured since I was going half the distance, I had a decent shot. Nope, it wasn't to be as I averaged 6:51 to Max's 6:40. This could explain why he has an assortment of Team USA singlets while I have my Sisters Outlaws singlet.) Andy also beat the old 50k c.r., finishing in 3:41:53 for 2nd. Ruben Galbraith ran solid for 3rd and almost reeled in Andy with his 3:42:00 finish, his 3rd straight podium at Hagg. Pam Smith continued her fast running as part of her WS build-up, winning the girl's race in 4:18:34, comfortably ahead of Shari White in 4:34:18. Abi Stephens finished a strong 3rd in 4:37:01. Winning the fat-guy division was William Swint, surprising everyone with a speedy 4:04:11 (are you sure you didn't run the j.v. race, William?).

Thanks to Todd, Kelly, and Fuzz for putting on a great race in there rookie year as r.d.'s. I'm impressed. And I really like the finisher's socks! Great idea - you must have gotten the idea from a really cool race. 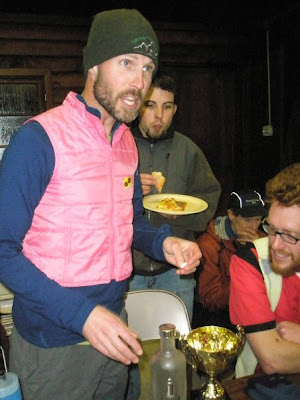 I'm sporting the loser's vest at the post-race party (yes, that's a nuuntini in the cup!).
Congratulations, buddy. Enjoy your few months of glory.
Posted by saschasdad at 23:07 6 comments:

Matt and I first met at Where's Waldo 100 km in Aug., 2006, where he was pacing Krissy to the overall victory, and I played along the way trying to win the Wet Waldo award (I didn't). It was a short, brief meeting. 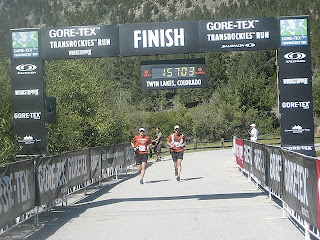 Matt and Me finishing Stage 2 of TransRockies 2008 (photo by iRunFar).

In 2007, Matt and I both had the same idea for a solo June road trip - drive to WY to run Bighorn (Matt in the 50 km, me in the 50 mi), play in the Tetons for a few days, then head to Tahoe to pace at WS. We decided to join forces, and somewhere between Spokane and the Tetons, a friendship was born.
Since then, we have had many epic adventures together: Tetons, Colonel's Summer Boot Camp, Colonel's Winter Boot Camp, Olympic Natl. Park, WS, Bighorn, and, of course, the most epic of running adventures ever, TransRockies.
TransRockies is the only race Matt and I have ever competed in together. But we were teammates, so we were (quite literally) pushing and pulling each other along there.

Me and Matt all cozy at Camp Hale (photo by iRunFar).
We have never raced head-to-head. This year, that's going to change. We're signed up for two of the same races.
This weekend we'll get our first grudge match at the Orcas Island 50 km. Matt is a former winner at Orcas. I've never run it. From past reports, it sounds like it's more of a Hart-friendly race. Plus, he has the course knowledge.
Epic duel / grudge match / battle royale #2 comes on May 29 at the Pocatello 50 m. I was third there last year. Matt has never run it. This course has very long ups and downs; most of the ups are runnable, which generally favors me.
So my dear friend Matt, here we have it: You and Me, man-o/man-o, Orcas and Pocatello, battle royale, survival of the fittest (fattest), death to the weak, winners rule/losers drool, etc, etc. 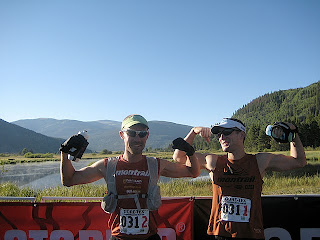 Whaddaya say, Matt...let's see who really has the biggest muscles! (photo by iRunFar)

I propose a friendly wager of sorts, my friend. No, that's not right. I propose a bet! Winner is the one with the lowest combined time of these two races.

The winnings? Let's leave it up to our blog readers to come up with something. And it can't be something lame like money; besides the fact that neither of us has very much of that, money is just so impersonal. The loser of this bet needs to hurt. Embarrassment is a plus.

So dear readers (hopefully of both of our blogs, if Hart takes the bait), we leave it up to you; please comment with who you think will win, and what the bet should be.