Hi, my name is Sean, and I'm addicted to flotrack.org, Haile Gebrselassie videos, Chris Solinsky videos, and pretty much any and all other videos that show fast runners running really fast.

When I finally bought a computer in November, I thought that I'd be blogging at least twice a week. No more computer cramming sessions at the library where I could just barely get my internet to-do list crossed off, let alone blog. One post was going to be committed to running (shocker), and one post a bit more controversial - throwing some issues out there to see what you think and why. I could just chill out while surfing and blogging away in the comfort of my home.

And then I found running videos. I dare you to watch the Chris Solinsky video and not get excited. Seriously. In fact while writing this post I'm replaying that video for the 10th time or so, going back and forth between writing and watching.

So in addition to my running and racing, of which there has been plenty of both, I've been spending many evenings, sometimes very late into the evenings, with my newest form of crack. And thus, the blogging has suffered. I am determined, however, to at least try to get caught back up.

Had a sweet weekend of 2 trail races, Buck Mtn. Mudslinger 6.5 miler (organized by the very cool Gary and Shandi at Run Wild Adventures) and Tumor Shooter 7 miler, with the Newport Seafood and Wine Festival squeezed in between the races. Although the festival ended up being really crowded so my friends and I ate seafood, drank wine and beer, and played games in a really cool condo on the beach instead. The races were both super fun. Buck Mtn. lived up to its Mudslinger name, while the Tumor Shooter helped raise some money to shoot Johanna's tumor. A good group of runners ran this double, one of whom I whooped in a bet and will pay up soon.

The first weekend of March I ran the Napa Valley Marathon with high hopes of sub-2:37 for a sub-6 pace. I never got into a good groove, feeling like I was pushing too hard for the pace I was running, then ultimately blew up the last 3 miles, finishing in 2:50.

Then after 7 races over the previous 6 weekends, I decided to take a break from racing and help out at the local 5k/10k, Grin and Bear It run. Despite whacking a deer on the way to the race, I really enjoyed marking the course and just helping out in general. Volunteering is awesome!

The following weekend was the Santiam Canyon Scramble, another Run Wild Adventures production. This was a classic scramble and true to form, I got whooped! I just don't do well at runs that include bushwhacking off trail, hiking up super steep climbs, arms-flailing descents, and where shin guards wouldn't have been weird. I was so beat up after this and I had a complete blast! As a bonus, I got to autograph a pair of Montrail Streaks for the very enthusiastic Ryan Krol. 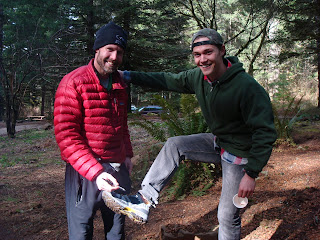 Autographing my first pair of shoes!

What better way to finish the first quarter of the year than by running a marathon? Well, I couldn't answer that question, so I ran, and ended up winning, the Yakima River Canyon Marathon in 2:45:14, complete with a nice 2 min. negative split on the tougher second half (getting a little Napa redemption in the process). My good friend Annie won the women's race. The post-race party Annie, Steve, Chris, and I created was one of the best ones I've ever gone to, complete with wine tasting, pool, beer, darts, wing-eating contest, karaoke, bowling, talk of a beer mile (next time)...truly epic!

Winning the Yakima River Canyon Marathon. I never saw all of that writing surrounding me during the race.

Helping Super Dave with the Horse Butte 10 miler was another fun volunteering opportunity. It really is fun to help out at races then cheerlead for everyone as they're closing in on the finish.

Of course my biggest adventure of the year so far was the Peterson Ridge Rumble. Once again it was awesome! There were about 350 registered runners, 290 finishers, 1 lost kid (who was found!), 1 broken bone, 10 people and 2 dogs at my house, fantastic timers (Run Wild Adventures), and some of the best post-race food ever. I decided to do away with the burgers and hotdogs, instead splurging a bit and hiring Long Board Louies for a burrito bar. This was one of the single most popular decisions I've ever made regarding the Rumble, and as such, Louies is already booked for next year. And as always, Nancy P's provided the to-die-for Peanut Butter Fudge Bars, Brownies, and Wonder Bars! Thanks so much to all who Rumbled! 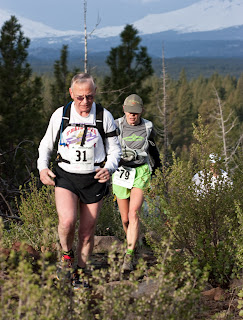 Post-Rumble I always like to treat myself to something fun, so finally after years of wanting to run the Race to Robie Creek 1/2 marathon in Boise, I did it. It's mostly a dirt/gravel road, gaining about 2,000' in the first 8.4 miles, then bombing down the final 4.7 miles while losing 2,500'. It was the first warm day of the year for me, plus having the race start at noon and running in a canyon where the heat was trapped, made for a little extra suffering foe me. I averaged a heart rate of 185 (maxed at 197) and was happy to just nab a top-10 finish (out of 2,500). This is a classic, fun event.

After being beat-up from Robie for a week, I didn't really have much time to fine-tune for my next race 2 weeks later: Bloomsday in Spokane. Bloomsday is a great event. There are 50,000 runners and probably that many spectators and volunteers, too. I grew up running Bloomsday every year from 1983-1995, with a p.r. of 42:40 in 1994. It's a 12 km and I had a goal of 41:00, which is 5:30 pace. From the gun I went out like it was a 1/2 marathon instead of 12 km, as my first mile was 5:43. That's pretty much the pace I stayed at then the entire race. I think the key to running well at short races is to go out aggressively, as there just isn't much distance to make up lost time. I finished in 43:17, a 5:48 pace, and surprisingly good enough for 86th (I was hoping for top-100, but thought it would take my original goal of 41 for that). Although not quite the time I hoped for, or even a p.r., I really enjoyed Bloomsdaying for the first time in 15 years.

Next up I have a fun little race this weekend, the Larison Rock Hill Climb 4.5 mile in Oakridge. The next weekend is Silver State 50 km in Reno, then Pocatello 50 mile on Memorial Day Weekend. All of this, plus a few solid 120-130 mile weeks and sauna sessions, will hopefully get me ready for my first "A" race of the year, Desert RATS Stage Race. It's 150 miles, 5 stages on Kokopelli's Trail from Fruita, CO to Moab, UT.

And that, my friends, is what's up in Sean-land.

Now I gotta go back and watch some more fast videos.