My good buddy sent this to me. Now, I don't care what your political affiliation is, but this is superduperpuper funny: http://www.cnnbcvideo.com/index.html?nid=239Q7JeFFSGFCMY1axAe0zYxNjMxMjM-&referred_by=12104736-n2ZwO9x

After many requests to update my blog so Punkin' Butt wasn't the first thing you see, I decided to replace that picture with this one: 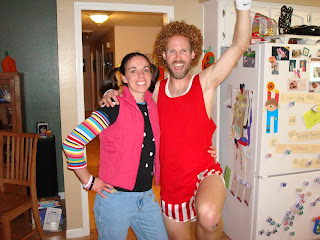 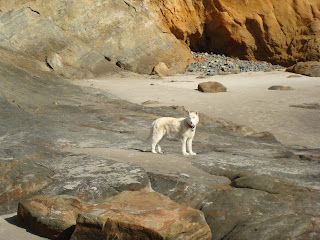 Sascha and I have been busy the last couple weeks with lots of runs, races, and adventures. On Oct. 18, the first annual Pilot Butte Giants Gallop 5k was held. I absolutely love doing PBRs (Pilot Butte Repeats) as a workout. I run the one mile road up gaining 500', and run the .8 mile trail down losing 500'. I try to do this workout once a week, with four repeats. So when I heard about this race, which was a fund raiser for Pilot Butte Middle School, I definitely wanted to run it. We started on the track, ran to, up, and down the butte, then finished back on the track. It was fun racing so I could get a new p.r. going both up (7:26) and down (4:15). Although definitely not a stacked field, I did win 19:18 (course record, baby!) and was challenged the whole way by a speedy masters runner from Bend. And I got to help the Giants raise $3500! (Click here to see PBMS's most famous alumni!)
That night was Poker Run Eve, meaning I had some Poker Runners at my house for a slumber party. Since it was a party, alcohol was definitely consumed. Apparently a bit too much for some...but I thought the Jose Black was pretty good. Well, until somebody decided to plug my nose while drinking it. But that person has apologized and will remain anonymous. A word of advice to those who do sometimes overindulge: pound a bottle of nuun before bed and another 2-3 bottles within an hour of waking up. It works.
Fatboy hosted the annual Sisters Poker Run on Sunday, Oct. 19. I think there were a 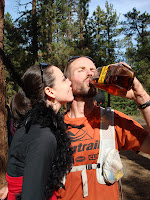 bout 35 runners this year, most opting for the 34-turned-into-37/38-miler, while some missed out on the best part of the course and ran 21. Some jerkos vandalized the course, which made the adventure even longer for a few. I spent parts of the day running with Sascha, Darla, Chris, Maeve, Michael, Nate, Tyler, Dave, and Krissy. Since it was a poker run, we obviously enjoyed a few more shots and poker girls at the aid stations. As for the run, I was playing pretty well through the first 4 aid stations, sporting 2 pair. I got hopeful for a possible full house, but ended with my 2 pair, which put me in 9th place. Hey, that's my best showing at the Poker Run. I'm getting good! (That's me enjoying a shot of Jose Black and getting a little kiss from the lovely showgirl!)
Immediately after the Poker Run, Gina, Sascha, and I headed to my favorite place on the Oregon Coast for some fun on the beach - Pacific City. A pretty, late-night walk on the beach was in order before going to bed so we could get a full day of fun in the sand on Monday. After checking out 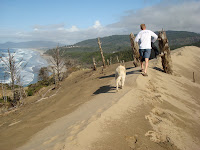 the tide pools in the morning, the big dunes were calling. Sascha and I absolutely love hiking up and running back down the big dune in Pacific City. It's super-fun and as an added bonus, it's a great workout. We did this a couple times before continuing on our walk up the beach toward Tierra del Mar. After a couple hours of frolicking on the beach, rolling in stinky stuff, eating dead stuff, and a couple more assaults on the dune, it was time for some chowder, salt water taffy, then the drive home through a snow storm (which I slept through). Quite a nice day at the beach. (This is one of my favorite pictures of Sascha and me.)
Thursday was the Sky-Em District Championship Cross Country Meet in Eugene. I rode the very full bus over with the Sisters team. Before we left, they presented me with a team sweatshirt, t-shirt, and long sleeve tech shirt. I love these kids! Once on the bus, it was my turn to give them something: nuun graciously donated a tube of nuun, water bottle, stickers, and tatoos to all 50 kids on the team. Thanks, nuun - the kids loved it! They all hydrated up on the drive over the mountains, while many also put their tatoos on for the races. The heavily-favored boys team dominated the 7-team meet, with their 7th runner placing 13th! They're headed to State as the #2 ranked 4A team in Oregon. The girls were in a tough, tight race. They battled their way to 3rd, with top 2 teams advancing. However, Sisters' top-2 girls advanced as individuals, so that was cool. This Saturday is the State Cross Country Championships at LCC in Eugene. Stop by if you have a chance. There's nothing quite like watching kids giving it their all.
Sunday, Oct. 26, was my 7th running of the McDonald Forest 15k in Corvallis. I absolutely love this race. In fact, it's my favorite sub-marathon race (and I've run a lot of races)! It's hilly (1,500' vertical), it's challenging, it's fast, it keeps you honest, it draws good competition, it beats you if you go out too hard, and it's a cross country fund raiser (I'm a sucker for this). Typically I finish in the 1:01-1:03 vicinity, with a best of 1:00:55 from 2004. After the marathon 2 weeks ago, Ness said I needed to go sub-60 at Mac this year. Great idea - so that was my goal. I usually start out pretty conservatively then pass lots of people going up the hill from 3-6. While it's obviously fun to pass, I knew I could do better. So I did a nice, long warm-up so I was prepared to start fast. Hitting 5:26 for the first mile sure was fast, but I felt controlled and good. I cruised through 2 in 11:27 and 3 in 17:36 before starting the climbs and pretty much settling in to 5th. I hit 4 in 23:53, then the real climbing started. I seriously felt like I was going faster, but my time at mile 6 showed different, 39:55. Oo, a 16:02 2-mile split. I knew I could get the sub-60 if I kept the pedal down. Mile 7 was 45:57, then 8 was at 50:29. Okay, a little quick math here says I ran the 8th mile in 4:32. Nope, not possible. Yes, it is a screaming downhill, losing 500', but I don't run 4:32 miles. Mile 9 at 57:30 confirmed this, as I know I was running faster than 7:01 pace. But I'm pretty sure the two together really were 2 miles. I was pretty excited knowing I had 2 1/2 minutes to run .3 downhill miles. I pushed hard through the end, finishing with a smile in 58:50, blowing away my time goal. I was pleased that I was able to go out hard and maintain a strong, steady effort throughout the race. Yet another positive racing note in the last 5 weeks.
Sascha and I haven't done a cool adventure in the mountains for a while. So today, we decided to head to the mountains and play on Mt. Washington. Never having been up it, we didn't have any expectations as far as how high we could go. With some sore quads thanks to the Mac, and the steepness of the climber's trail, we definitely did a fair amount of hiking. But that was okay. It was a beautiful fall day - sunny, warm, some foliage, and I was hanging out in the mountains with my favorite training buddy...it doesn't get much better.
The next few weeks will be about getting ready for CIM. Two senior guys on the Sisters XC team even asked if they could go with me and run. Awesome!
Posted by saschasdad at 23:37 9 comments: 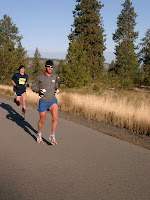 That's my new marathon p.r.! I just ran it today in the Spokane Marathon. Gina and I drove up from Sisters yesterday to visit my fam, so of course I had to fit in a race. Conveniently, the Spokane Marathon was this weekend. I had wanted to run it for a few years, but it never quite fit my schedule.

With 1,700' of climbing and equal descent, it's a tough course, and it's also very pretty. With no specific marathon training any time recently, I entered it wanting to run around 2:50, kind of a training race in my CIM preparation. (The kid with me is 19, running his first marathon, we're at mile 8; he ended up over an hour behind me; I felt bad for him, but like all of us, he'll learn!)

Anyway, when I finally realized I wasn't going to slow down, but just keep getting faster (somewhere around 20), I did some math-on-the-fly and realized I could actually get a p.r. So that became my goal and I went for it pretty hard to the finish, with my last 10k in 37:30 - which included the infamous "Doomsday Hill" from Bloomsday. The hill did nothing for me, speed-wise, anyway. It was fun flying by the hordes of 1/2 marathoners that had just joined the marathon course. 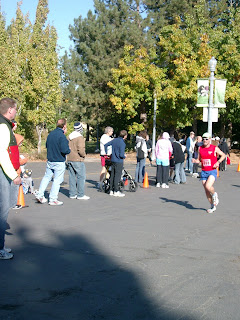 I ran focused and with a purpose the last 30 minutes, and even got a slight case of tunnel vision in the last mile. That was kinda fun! I eventually wound my way back to Riverfront Park, weaved through oodles of people out playing, and found the slightly chaotic finish line. I say slightly chaotic because there were lots of 1/2ers finishing right around me and I came up to the finish so fast, I don't think they were really expecting me so they tried to point me into the 1/2 chute. I just went to the right one and then they figured it out. 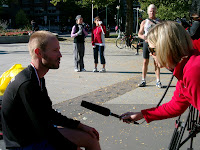 I was stoked and tired when I finished. After 30 seconds, my mom found me and I had to lean on her while we walked to a seat. It felt so good just to sit there in the sun, warm and happy. I had just averaged 6:12 per mile for 26.2 of them and I had won. It was good. (Local celebrity!)

After winning uber-tough Crater Lake Marathon 2 months ago, then today's p.r. and win on another challenging course, it makes me realize that apparently I like the tough road marathons. And that running lots of miles in the mountains, with hardly any specific speed work, helps get me fit for said road marathons. Perhaps I'm on to something.

Now I have a little dilemma. I had originally planned on training hard the next 8 weeks with a specific goal of sub-2:40 at CIM. Now, after today's race, that seems kinda sand-baggish to me. Perhaps 2:37? That would make for a nice, round 6-flat pace. But that sounds pretty fast and intimidating. Opinions, suggestions, ideas??

One short note on the shoes I wore: Exactly 9 days before the marathon, Paul Curran sent me a new pair of tester shoes from END Footwear. END is a new, green, running shoe company out of Portland. Their goal is to make the greenest shoes possible, and very light shoes in the process. The model I'm testing is the YMMV (Your Mileage May Vary), which weigh in at a svelte 8 oz, so they're light. I put about 60 miles on them in the week before Spokane, and I liked them so much that I decided to wear them for the race. Well, I loved them in the marathon, too! They're light, flexible, cushy, very light meshy upper that hugs my foot nicely, and best of all, they're fast! Zero blisters, and now, a day later, my legs really aren't beat up. I'm lovin' em. (Goat has done at least one write-up on END Footwear, too.) Watch for END in specialty stores in the near future -they're a good company and one that I feel good about endorsing. And, with my 2:42, that currently makes me the END Footwear Marathon World Record Holder! Pretty cool.