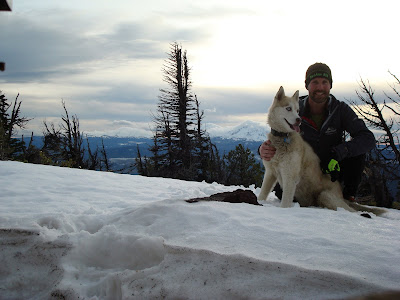 Sascha and I would like to wish all of sascharuns' readers a very Merry Christmas! May you all enjoy the peace and happiness that makes this wonderful season so special!
To all dogs out there, from Sascha "bark, bark, woof, bark, woof, woof, hooowwwwl, pant, howl, woofity, woof, woof, BARK!"
Posted by saschasdad at 09:10 5 comments:

I've put off writing about my race at The North Face Endurance Challenge 50 miler in the Headlands. For most of my ultra history, I tend to pick a big race at the end of the year to really focus on and peak for. The past couple years, I've done it at JFK in '07 (plus Hellgate that year, too), and CIM in '08, all with good results. This year, I planned to kick butt in the Headlands. In short, I was in very good shape, I had big expectations, some good speed in my legs, and I was very rested, fresh, and anxious to race...and I cracked!

Basically I ran very easy with Caitlin and Joelle to Pan Toll at mile 18. My plan was to refuel there then really start racing. But when I went to get my drop bag, it wasn't there. A couple volunteers, Meghan, and I looked around for a few minutes...nothing. So instead of just sucking it up, grabbing some Accel gel at the aid station, and rolling with it like a veteran ultrarunner of 108 ultras would do, I decided to pout, be cranky, and continue running with just my one remaining gel. Oops.

The rest of the race was spent alternating between feeling great for about 15 minutes out of each a.s. after chugging a couple cups of Coke, followed by big bonks...a 32 mile long roller coaster ride. It was also a very lonely final 20 miles. After AJW flew by me on the descent out of Pan Toll 2 at mile 30 ("my breaks aren't working" he hollered as he flew by), I didn't see a single 50 miler the rest of the race (I did, however see some 50 k'ers). I eventually jogged across the finish line in 8:25:26, a lot slower than I had hoped. I have good days and I have bad days. That's the way it goes.

Precisely 1 second after I finished, my yearly running sabbatical commenced. When I take a break from running, I really take a break from running. As in, no running. I've been running ultras for 8 1/2 years and I didn't take a break after only one of those seasons. As a result, I was very sluggish early the next year. I really do look forward to this break. Up to a point, it lets me evaluate my year and put together a tentative schedule for the coming year, but more importantly, it just lets me clear my mind and body of running and racing. It's a much needed rest!

In thinking ahead about my 2010 running and racing ideas, I'm going to ease off from ultras a bit. A big ultramarathoning goal of mine was to finish 100 ultras, which I did at Run to the Sun in March. Now with 108 finishes (115 starts), I'm anxious to get back to some shorter stuff. When I lived in the Tetons and Steamboat, I ran a lot of mountain races and I loved it! I'm going to do more of those next year. A few classics I'm definitely planning on are Race to Robie Creek, Mt. Ashland Hill Climb or Steens Rim Run 10 km, and Pikes Peak Marathon.

Although I'm cutting back on my ultras, I'm not cutting them out. In January, I get to play in the Texas hills at the Bandera 50 km, and in February, I'm headed to the San Juan Islands for a weekend of ultrarunning camp at the Orcas Island 50 km. I'm signed up for the Desert RATS stage race in June. This is a 6-day stage race covering the 148 mile Kokopelli Trail from Grand Junction, CO to Moab, UT. In October, I get to go to Chile for the Ultramaraton de los Andes 80 km. That's gonna be awesome!

Of course, I'll be r.d.'ing the 8th annual Peterson Ridge Rumble 30k/60k on April 11. Because I live in such a cool town with such a cool trail committee, the course will once again be slightly different, replacing some old double track with sweet, new singletrack.

I'm hoping to run a couple of the cool runs that the new race organization, Run Wild, is holding in the woods outside of Salem. If I break out the snowshoes a few times in the next month, I may even run a snowshoe race (another type of race I loved doing in CO and WY). In the summer, I'm planning to run a few races in the Oregon MUT Series, too.

If I'm really lucky, I'll get to pace my good friends Jamie and Kilian again, as they each have some pretty lofty goals set for themselves in 2010.

I'm also excited that Sisters Little Ultra Team has doubled in size. Fatboy and I will be joined by new Sisters residents, and my very good friends, Ashley and Josh.

Sascha. She's the one I'm really looking forward to hitting the trails with in 2010!
Posted by saschasdad at 02:10 11 comments:

On both my drive down to and home from the Headlands over the weekend, I heard a lot on the radio about Tiger Woods. Tiger, blah, golf club, blah, SUV, blah, fire hydrant, blah, mistresses, blah, upset wife, blah, Nike, blah, $130 million, bl...what? One hundred and thirty million what? Dollars? As in $130,000,000!? Being a math / numbers guy, that very quickly caught my attention. Apparently, that's how much money Tiger made last year - $20 million in golf winnings and $110 million in endorsements.

Since I'm geeky and I enjoy doing math in my head when I'm bored, I kinda enjoyed all of the free time for some simple math.

Hourly rate, you say? A cool $14,840, each and every hour of each and every day. Sleeping, awake, golfing, eating, watching football, having affairs, whatever. Makes your attorney's hourly rate not seem so bad, afterall! 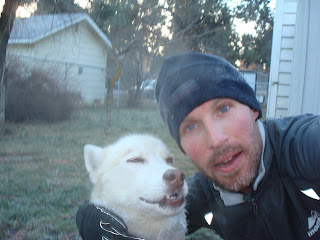 My running buddy and me after a frosty morning run.
About this time of year, my running starts to wind down. I figure I've put in lots and lots and lots of miles, so my body looks forward to some much needed rest. Looking back at my running and racing year, as usual, I ran A LOT this year all the way through September, especially April through September. I don't log my mileage, as I tend to get too competitive with myself, but I always have a rough idea and I figure that by the end of September, I easily had over 3,000 miles in the legs for the year.

Through June, I had run 9 ultras, 2 marathons, 4 short races (short = anything shorter than a marathon), and lots of cool, long adventure runs (R2R2R being the coolest and longest); in other words, lots of miles. In July, I only ran one 10k; in August I started 2 ultras, finishing one, and raced Hood to Coast (super fun race!); on the first weekend of September, I ran an ultra. Now here it is, three months later, and I haven't run an ultra since. Although that's pretty much a lifetime for me, I did it on purpose and I've enjoyed it.

After a week of playing in the Tetons in Sept., including running the Grand Teton 50 miler, I decided my body was tired so it was time to slash my mileage, bump up the intensity, and race some shorter stuff. No ultras for at least a few months!

Volunteering with the Sisters Cross Country team has definitely helped me work on the intensity part of my plan, as has Max King's Tuesday night speed workouts. I've only been averaging 80ish mpw, as opposed to 100-120 from April through September. And I've been enjoying racing lots of short races! Since late-September, I've raced: xc 5k, road 5k, xc 8k, road 1/2 marathon, road 3 1/2 mi, and 2 road marathons (Tahoe and Columbia Gorge). It's been a blast! I'm still getting my racing fix, recovery is super quick, and these short races are great speedwork. Plus, I even got a new max heart rate p.r. at a 5k!

Anyway, about a month ago, I decided my legs were feeling fresh and spunky enough again to run an ultra, so I signed up for The North Face 50 miler. It's this weekend in the Marin Headlands. Right after I signed up, just because I'm me, I ran one 95 mile week (forcing myself to not hit 100) that included a 4 hour, 25 miler with 6,600' of vertical at Smith Rock. That run and the 2 marathons are my 3 long runs since the beginning of September. I'm hopeful that those runs plus all of my shorter, faster stuff (including plenty of Pilot Butte repeats) works for me. It's a strategy I've never tried before for a 50 miler. I'm excited to see how it works out, but most of all, I'm just excited to get out there and race 50 miles again!

And then, it will be time for a real break.
Posted by saschasdad at 01:30 4 comments: