Casually pondering the decision to run the Redding Marathon for a few weeks, but committing only the morning before the race, I made the easy drive down on Saturday afternoon after work for a couple of reasons: to get out of central Oregon's 25 degrees and freezing fog, and to test my current fitness. Sure, I just ran a 1/2 marathon p.r. last weekend, but that's a short race. I wanted to see where I'm at for longer stuff, and if I had a good race only a week after the 1/2, then I know I'm fit. 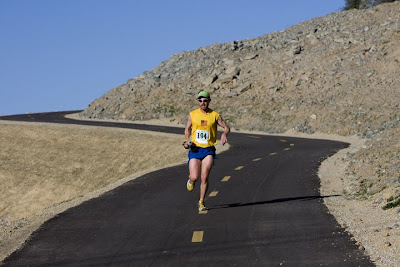 Cruising down to mile 15
(photo by Greg Barnette / Record Searchlight).
The website's description of the race is very inticing. It is very thorough, has great pictures, and explained really well the variety of terrain. There were paved roads, steep downs, flat gravel trails, rolly dirt roads, flat bike paths, and rolly bike paths. I love a course with good variety, and the Redding Marathon has lots of variety.

I knew Hal had won the marathon the last 2 years in 2:45 and 2:35, and Ian got second last year in 2:49. Although the course was a bit harder this year (according to many vets), and a bit long (anywhere from 1/4 mile to 1/3 mile, depending on who's Garmin you believe), Hal's and Ian's times helped me set a good, solid goal of 2:45-2:49. I felt if I could comfortably run somewhere in that range without ever going all out, then I'm fit. Also, since Hal and Ian weren't going this year, nor was 2005 champ Neil Olsen from Central Point, OR, I knew I had to represent Oregon well.

At the gun, the pack took off flying down the first mile and a half to the dam. I held myself back and still ran a 5:56 first mile - my fastest opening mile ever in a marathon. I was probably in 12th place. As the road flattened crossing the dam, I passed a few people, but on the other side, the trail turned down hard again, and people started flying again. Except me...I held back, although I still passed 3 in 18:15. When the trail flattened just past 4, I was in 15th place and again started reeling in people. I didn't speed up, they just slowed down. I passed mile 5 in 30:55, and by 7 (43:45), I was in 7th place and feeling good. I even whooped it up with an early starter through a really cool tunnel.

Around 9 (56:31), I passed 2 more guys and could see a string of 3 down the trail in the distance. This continued to give me motivation and as I flew by the first one around 10, I asked who ahead were marathoners and relay runners. He said the 2 right ahead were marathoners, and another guy was way up, but he was a relay runner. Approaching mile 11, the first relay exchange, I could hear a big crowd cheering crazy. That motivated me to fly by the next marathoner, JC Callans, right at mile 11 (1:08:52). I chatted with JC for a few seconds about him starting out so fast. He wasn't wearing a watch, so he didn't know any better.

The next guy up the trail kept looking back and would surge whenever I kinda got close. I could tell he was running a little scared. I caught up to him just before 12 and just to verify my place, I asked him what place he was in. He said first. Well, technically, I was a couple strides ahead at that point, so I said, "no, I'm in first". He conceded the point.

Miles 11 to 16 were pretty fun because they were the biggest up hills of the race, with sustained ups and downs and some great rollers. I passed 13.1 in 1:22:25, slightly ahead of my planned pace, but feeling great. Mile 14 was a nice uphill grinder then 15 was a fast downhill, which I cruised past in 1:34:44.

I was now on the Sacramento River Trail paved bike path for the rest of the race and in direct sunlight, starting to get a bit warm. But shortly, the trail weaved in and out of shade, providing welcome coolness and some unwelcome icy parts. I continued running comfortably, going by 17 in 1:47:03 and 19 in 1:59:36. Around 20, the course gets pretty windy and goes up a couple of short, but steep, hills. These kinda hurt and definitely slowed me a bit, as my 22 mile split in 2:18:51 shows. My super-secret big goal of sub-2:45 now seemed out of reach.

I did get a little boost at 22 by passing the first relay runner, now putting me in the overall lead. I ran past 24 in 2:31:26 and although I probably could have killed myself to go sub-2:45, that wasn't the goal for the day, so I just continued on at my steady pace. As I approached the spectacular Sundial Bridge (which I lamely did not check-out after the race), I started to get excited. I just had to cross it and finish...but wait! They threw a cruel trick our way and made us do about a kilometer an out and back before crossing the bridge. I wasn't psyched about this. Anyway, I eventually ran past 26 in 2:44:30 and pushed hard to the finish to go sub-2:46. I was super happy to finish in 2:45:42 for the win. It was a beautiful day, with spectacular views, on a great course, with excellent volunteers. And the weather was perfect; mid-40s to mid-60s during the run and mid-70s for the post-race in the park. It was so nice to hang out in shorts, short sleeves, and flip flops. Thanks SWEAT Running Club!

As the course currently is, although it's net-downhill, it's definitely not a fast course, but it is a course that keeps you honest by rewarding you later on if you don't kill yourself the first 4 miles. That's what makes it fun. I would love to run it in the reverse direction, finishing with a killer 4 mile climb. That would be awesome!

Full results.
Posted by saschasdad at 21:27

Sean:
Great job pacing and congrats on yet another impressive win. My friend Troy who just got back told me that Hal and Ian were not running it and that 'some other guy from Oregon' had won, which made me wonder if you had come down for it ;-)
Sorry I missed you today!
Take care and, yes, you're fit!

Smart and inspiring...ensure to eat lots of cheese fries!

What, running a 50K and a half marathon on back to back weekends and you have to wonder if you're fit? Hopefully these victories will help you build some confidence! Nice race, what's next?

Nice job Sean! You are on fire. What's next?

Nice post :) We are all really proud of our Marathon here in Redding. Good job! and nice dog. Gal on the red bike

Sean the Stud! Another win??? WTG! Yeah I ran this race last year, weather was about the same. I like course and would do it again for sure. It is so sweet to sit in the sun in January.

Jeez, I am getting scared of you, boiw my head. Are you human?

Congrats on your win!
And thanks for the encouragement, haha....determination vs. stubborness.... my strength is my downfall! How many marathons (not ultras) do you run a year?

Nicely done, Sean! Your fitness level is rock solid for so early in the season. I'm expecting great things at States. ;-)

Way to represent OREGON. It is a killer course, but really Sean how could it be harder with even more downhill?

You suck. You come to California and YOU DON'T CALL? Loser. I'm mad. Well, as mad as I can really get. ;)

Nice run and win. That photo rocks, too. I hope you're proud of yourself!

Can you say Fast! Awesome job. If your this good on the trails, can't wait to see what you do at WS.

Congrats on another solid win! Hope to see ya, however briefly, at Western this year!
GR

I don't know you, and found your blog upon googling the Redding Marathon in 2010. Your race report was impressive. I just ran my first marathon (the CIM) and am stoked to continue improving. I've always wondered what the winners think about as they run. I loved it when you asked the guy what place he was in. I don't think you need to worry about your fitness level. :) Very inspiring! Happy Running!