Yesterday I ran the very flat and fast Cascade 1/2 Marathon in the bustling metropolis of Turner, OR. Okay, not so bustling, but on Cascade 1/2 Marathon day, it is definitely taken over by runners - about 600 people gather to run either the 1/2, 10k, or 2 mile. I mean, it is Oregon's only 1/2 marathon in January (seriously, that's what the website says).

Anyway, this was my 5th road race since the Bigfoot 10k in Bend in late-September. Out of those 5 road races, I p.r.ed in 4 of them. One was intentional; the other 3 weren't. This was one of the other 3.

After CIM five weeks ago, I didn't run for a week, the next week was 40ish, then Christmas Camp and its 102 miles, another 100 mile week (only because the BadAss was in this week), then last week was 70ish. I guess I did a tiny bit of speed work, but only the few times I ran on a treadmill. Anyway, I guess that, plus my residual fitness from CIM (which I was sure I had lost by now), plus a couple 100 mile weeks, got me back into shape.

I was definitely working harder going back into the wind, but I ran the exact same pace. Usually I like to negative split, but I was happy with how I was doing. I hit 10 miles right around 58-flat. At that point, I knew I had a fighting chance to go sub-1:16. So I pushed hard for a mile, eased off for a mile, then planned to go hard the last mile directly into the wind. I was pretty beat when I reached 12.1 in 1:10:15 and knew a solo 5:45 last mile was going to be tough.

Suddenly, two dudes caught me from out of nowhere, and normally I would hate that at this point in a race, but today I was stoked. I tucked in right behind them and they pulled me along the next 3/4 of a mile. The last 1/4, they sprinted each other and I didn't have anything to give chase. So I pushed on solo, happily finishing in 1:15:57, good for 9th place, and my new 1/2 marathon p.r. That gave me a 5:48 pace, and 2nd 1/2 of 37:59. Pretty much perfectly even splits. I was happy! 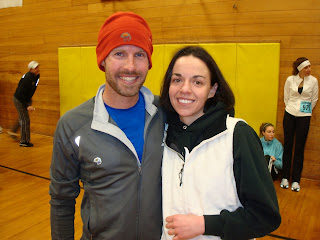 You have some scary good results ahead this year....

Great job Sean, I too finished 9th with a great PR this weekend. It's a good thing you're in a different state. ;^D

Nice work Sean, congrats on the p.r. Keep up the good work

Nice start to the year Sean. Those mile splits are incredible. Yes I know there are others faster but to most of us that's just very cool. Congrats to Gina Too. Your Christmas Camp prizes are almost done.

Did that race a few years ago. It was windy then too. Great PR again! I need a new job...working too many weekends!

Nice run, your nickname should be "PR" it seems that is all you do. I noticed that the 2 guys that sprinted to the end were 19 years old, no need to chase the young guys.

honestly i didn't read the whole blog. i need pictures to break up all those words. however i do know from facebook that you ran hella fast. congrats and i just hope somewhere in all those words you say that it hurt. because if it didn't i'm not sure we can run together anymore.

Sean, that was an awesome run! You didn't sound like a sand bagger at all. I think one of the things I need to work on is to not be afraid to push a little harder. I tend to stick to the pace I have set in my head before the race. Mr. Liger is a pretty scary dude to have behind you.

Congratulations on another awesome race! 2009 looks to be fabulous for you!

Glad you liked the shirt...that was a PR for me too. Great race, Sean...see you at Hagg Lake.